Lai Hu sure knew how to push it all right! Even his old man couldn’t help but side with the others. 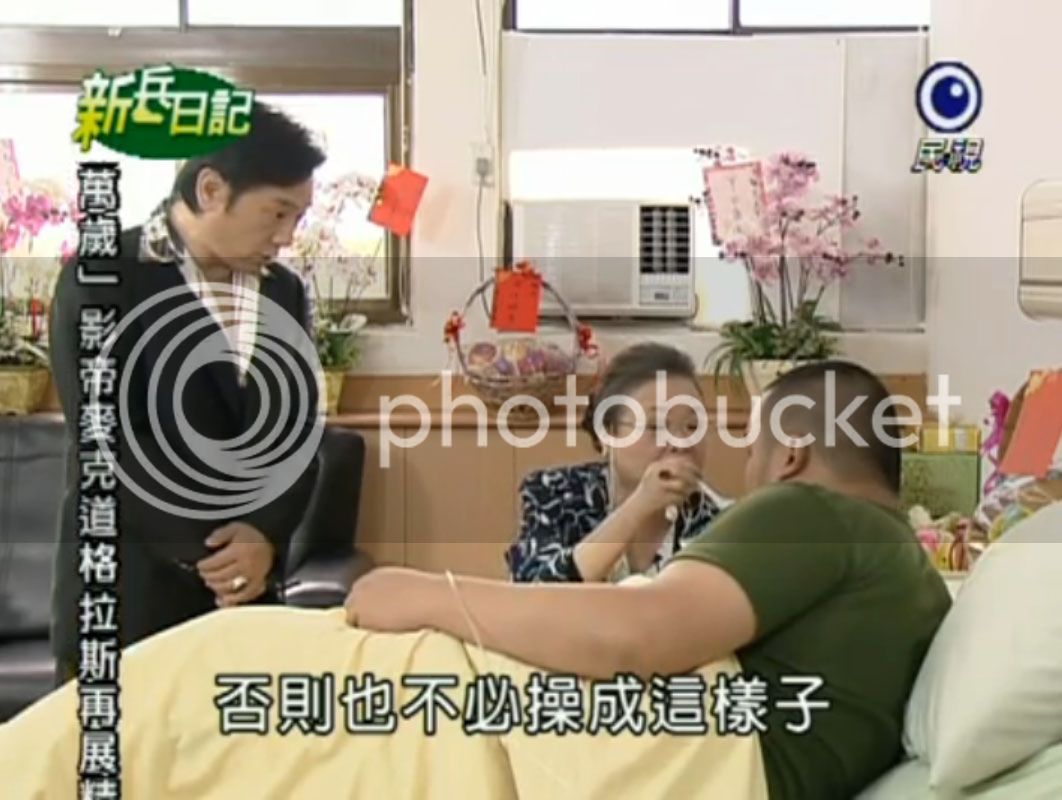 One thing was for sure, he was a Momma’s boy. Well, more like Grandma’s boy, LOL!

Boss Lai to the rescue! He was so cool! He made the whole situation less annoying, considering how I said I hate those scenes in the last episode. So funny how he diverted out of the sticky situation and did not give the reporters any satisfaction for that matter. If he wanted to take action or expressed his opinions, it was between him and the superiors, NOT the reporters who were only looking for a juicy story. Boss Lai was so funny though, pushing everyone closer for a group picture, LOL! (Ekk! I just realized how much of a spoiled brat Lai Hu is with his grandma feeding him the whole time he was watching the news clip! But it was nice how she managed to get a hang of him also, persuading him to go back since he had to learn how to be strong before protecting her. Aww…)

And I guess Boss Lai was a man who strongly believed and respected his country greatly, so what he said to the others was true, NOT just putting up a front. He knew his son needed some sort of discipline to grow up, not just being harsh on the boy. It was funny that the grandma was giving the others orders! LOL! What? He was there to train, NOT on vacation. Why should he be given a special treatment? Of course, they’ll be extra careful from now on but that was WAY over. Even Boss Lai looked like he sympathized with them for being put on such a hard spot. He had to jump in and tell the others to be strict on Lai Hu? LOL!

Gossip time again? Shan Ren seriously hold grudges! Darn, he was really expecting the worst to happen to An Bang? I only feel sad for Wang Wei in this whole situation. Shan Ren just had to rub it in and pour more oil into the fire. How petty. And he still dared to say it? He was the one who riled Wang Wei up and now he was whispering? OKAY… (If the others only knew that An Bang was concern about Wang Wei’s problem as well–even more than himself.)

That was kind of cliches with her bike breaking down like that. BUT they had to start with something. It was kind of fun seeing their morning routine though. It would’ve been funny if he couldn’t fix it and they had to call for assistance. BUT he was a very talented person after all. It would be too much of an insult if he couldn’t fix it. And how convenient was that? He had to have a handkerchief at a ready like that? WOW… AND I totally guessed that one! She got lost! She couldn’t tell directions. That was just too funny. (OKAY, not impossible, but still hard to believe.)

Things seemed to be back to normal for the most part with Lai Hu returning and everyone was joking among themselves. Even Sheng Nan, Bi Ying, and Jing Wen were doing some bonding, LOL! But trouble seemed to be lurking in the dark – literally–as everyone headed to bed. YUP, Di Qiu was back with some tricks. OOoohh…they were spraying itching formula into the guys’ hats. Ekkk… Hope they get caught though. NOT to mention how the other guys could always get them back with something. WHAT? Lai Hu sleep-walking? Was he up to something again or… Hmm… does seem suspicious, considering how he always wants to edge his way out of his military service. What? Da Tong was also sleep-walking? (Oooh, or were they just up to something since they noticed Di Qiu’s plot beforehand somehow?) Tian Bin was the only one who sleepwalked though. YUP, Da Tong and Lai Hu were up to something. Wait, what? OKAY! Never mind… Busted! Well, he didn’t get scold, just some lectures. Agreed with An Bang though. Aww….Lai Hu let it slip, he was dead meat with Luo Gang–IF the dude found out!

Aww…Lai Hu didn’t even know how to mix it. He was 200% spoiled all right. No wonder his old man wants him to learn independence and strength. But after this, Lai Hu could see how An Bang could be at times, aside from the fierce leader that he was. (Even IF he really had to face more trails ahead. HEY, it’s not like An Bang’s going to spoil him too.)

Hahahahaha, that was so funny. Tian Bin went back to the wrong bed. Lucky the others were there to defend him. Hai Sheng was about to jump Di Qiu if he didn’t back down. You Shun and his ‘getting along brings fortune’ philosophy, lol. Not surprised. But Tian Bin was cunning all right. He didn’t want to recover or he would be working super hard like the others too.

An Bang was garnering some fans! (LOL!) Yup, they must have watched the coverage.

It was getting quite obvious that both Bi Ying and Jing Wen like An Bang. Hmmm…it’s killing me to know who he’ll end up with, but I’m betting on Jing Wen.

Oh no! But of course that was the purpose of spraying those itching formula–and to even place it into their hats. They were in for good this time. And it was the first time that it wasn’t their fault that they were shifting restlessly. Okay, they were learning how to move around if they were in that particular situation. I guess I couldn’t blame Shan Ren this time since the guys were really good with excuses in the past so now when they’re suffering for real, no one believes them. (Sounds familiar? YUP, the boy who cried wolf.) At least Shan Ren let them took their hats off to scratch. Too bad it was not a matter of the heads but it was the hats. They definitely need to get the other guys back major time! (Hey, the other side started first with bullying Shi Jun.) Okay, at least they got some satisfaction out of it–though they were punished again. They stomped on Di Qiu on their way to the run.

Not cool! An Bang getting scolded. I know they were being careful and trying to think for the recruits too, etc BUT it still sucked. Okay, I always knew Ding Hao cared, he didn’t abandon An Bang in such times. (Hey, that was why he was able to gain trusts from others, unlike some people who only cared for higher positions and abandoning some basic principles.) Lucky it was short. Possible trouble in the future but rather it was short. 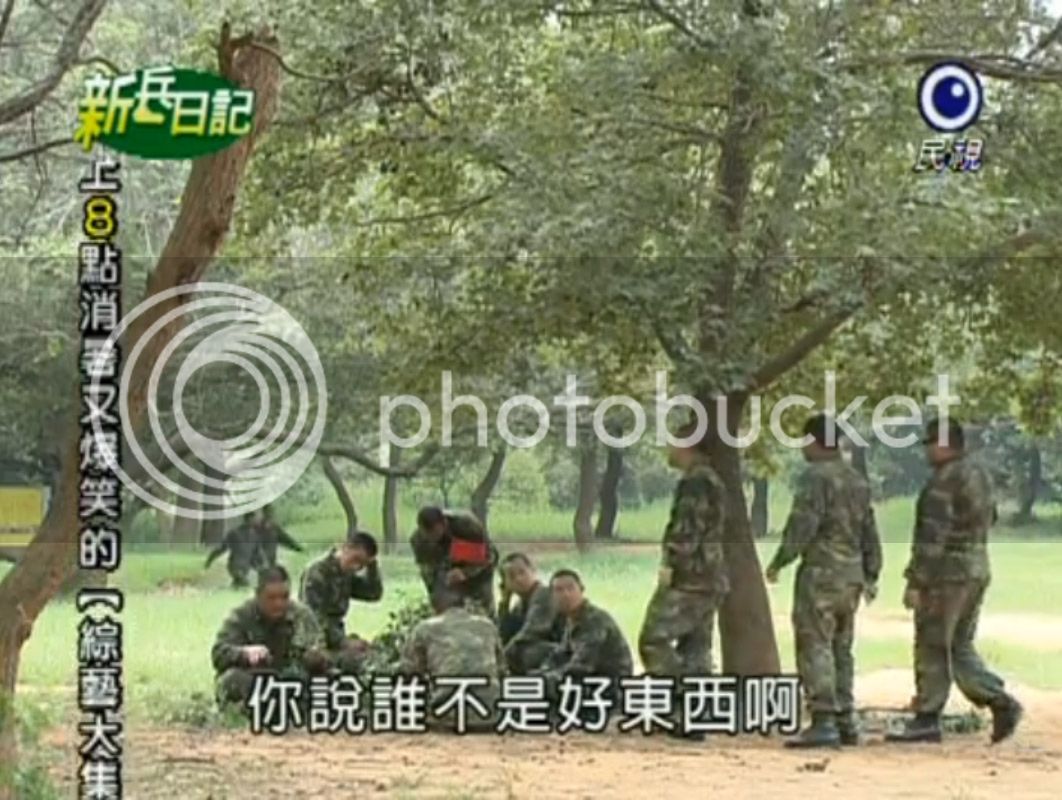 Well, they can’t go forward with revenge at that moment but a little sabotaging scene wouldn’t be as bad. (Thanks for the little background info from some of the guys. Now it’s more clear of why Di Qiu’s so stuck up.) Oooh…it was getting intense. Di Qiu dared to quote Sun Zi? OKAY…whatever. Hope You Shun went for help. He better be AND not run out on them. OOOOHHHHH…figured it out after Luo Gang and Hai Sheng came and broke the fight up. No wonder You Shun was sneaking away. Hao Zhi saw him, of course, since Hao Zhi knew him the best. How could he done it?

Man, it was priceless to see Hai Sheng and Luo Gang passing secret signals to one another. So cool! So glad that their feud ended ages already.  The others had no idea but Luo Gang was waiting there for the second part to come along, LOL. They were so pissed off. Can’t blame them. I guess no one taught Di Qiu this part about Sun Zi’s techniques, eh?

Previews? More intensity and troubles for Ding Hao and An Bang. Rats. AND what? Someone calling Bi Ying a pig head? NOT cool. She’s one of my favorites. But Wang Wei? Awww…that was cute. Can’t wait for that scene. AND what? Sheng Nan with Luo Gang or Shan Ren? They were teasing us too much. BUT that was funny with Shan Ren being scared of the ‘ghost’ again. Xiao Yan back? Aww…I miss her!

More BTS. Hilarious as always. So many NGs.

Ratings took another dunk to 9.98 BUT I don’t think it matters anymore. Well, it still matters. But at this point, either people like it or not. Just hope it won’t drop to the point of traumatizing for some of us.