This episode continued with An Bang’s jog.

Though I understand what Ding Hao was talking about, I must side with An Bang this time. I meant society has gone so soft that they might not be prepared for the worst. By going too easy on the soldiers, it would hurt them in the future. Sure, there must be an established line between doing the training and having breaks, but if there is too much lag, what would happen in the future if they encounter the worst? What would they do then?

Oooh…kind of funny. The lady boss finally met An Bang, the famous ‘Mo Gui Pai Zhang’ the others were talking about. Though she was a tad nutty, it was reassuring that she was supporting An Bang. Hopefully, it would encourage him to continue, not giving in to some hurdles.

Attempting to score points by playing the pitiful card? OKAY…. (Thanks to Wang Wei for reminding him to take care of the problem though.) That was priceless! Sheng Nan caught him celebrating. (Though been done before in other dramas but still funny.) 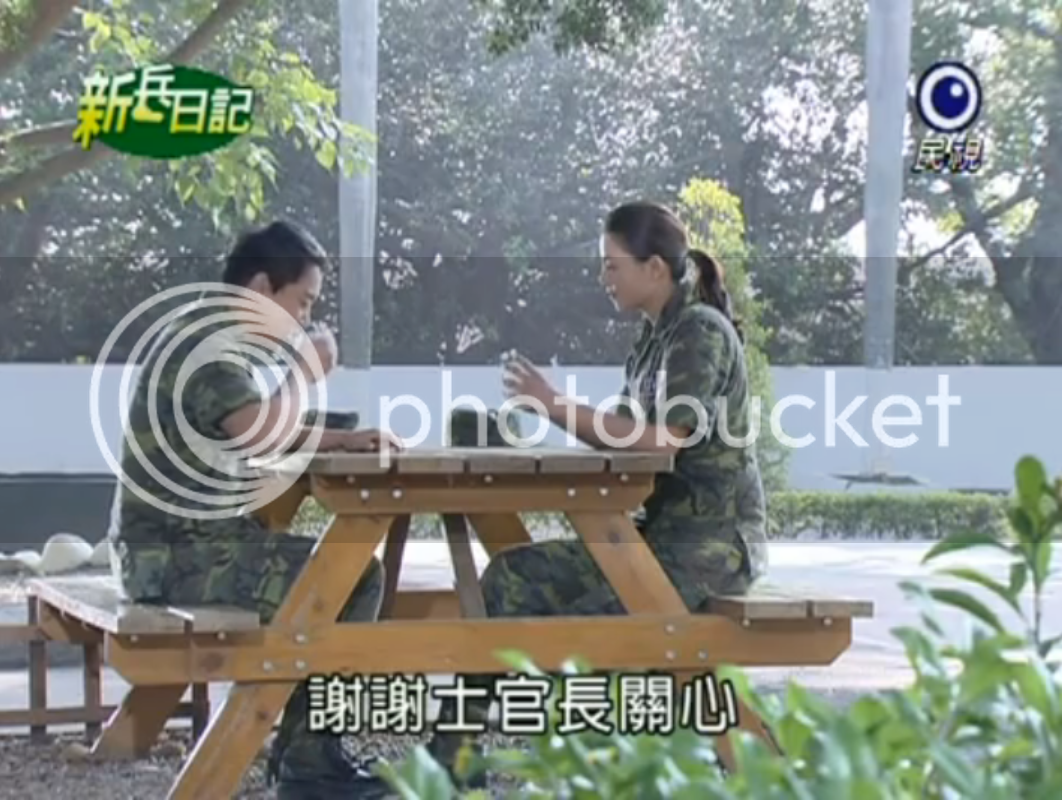 Aww…I’ve been waiting for this scene forever. (So Sheng Nan doesn’t shift gears after all? I hope not.) They were playing ‘Ai Shen’ in the background when Sheng Nan was on the swing and Shan Ren was thinking of…. (LOL) So Shan Ren was daydreaming about that scene! (Makes sense though since it would be too fast, considering Sheng Nan’s personality.) Even in daydreaming mode, Da Tong was there? LOL! But at least he was helping with spreading the flower petals down and NOT sabotaging, right? Bi Ying and Sheng Nan thought he was crazy! LOL! (Eh…and the scriptwriters are messing with us! Come on! Seriously? They’re making us guess too much. But I guess it might be good if it isn’t as predictable.

How many times can one get into trouble? Well, I guess the trainers would have to be more patient. But Da Tong was honestly driving everyone nuts. Hao Zhi fell asleep at the station? Darn! He was so asking for it. Wu Yong! I guess it wouldn’t be complete without Wu Yong doing something hilarious. (OR not so hilarious–to the trainers.) Wang Wei was effective all right. Bo Wen wasn’t any better. Not unbelievable though since he was so into his girlfriend. OKAY, I was so looking forward to that bully getting in trouble. For the first time, I can’t blame Tian Bin for being naggy with his instructions. The other dude was doing it on purpose to sabotage Tian Bin. Hahahaha! Tian Bin got him back! (I almost forgot that only Tian Bin was able to carry out the prank earlier with switching the tube in the shower.) AND the other dude thought he could get Tian Bin in trouble but he was suffering through the same fate.

Eh…Hao Zhi sabotaging You Shun again? Aww…but I actually side with You Shun this time around. Di Qiu deserved it! He could get rob by You Shun’s overcharging techniques and I wouldn’t care. Ooohh…so Hao Zhi had an ulterior motive, LOL! The auction!

LOL at Shan Ren’s comment! Honestly, they were like a mob of hungry people. Awww…Luo Gang doesn’t have any. It’s sad that he knows he wouldn’t get any regardless of how long he would wait for the names be to called. WOW, Wu Yong’s popular all right. Only two but that’s something. That was messed up! Shan Ren called Da Tong and then he found out that he doesn’t have any mail. Still kind of funny at first when I thought it was strange that his family would write to him when they could see him every day. Aww…giving Bo Wen false hope. Wasn’t Shan Ren’s fault since the characters were similar but still… Of course, Hai Sheng also has mail. Poor Bo Wen!

Aww…poor Hao Zhi! That’s life. People who do not want it will get it but those who want it won’t get it. You Shun’s question was funny though. (Did you see a ghost or something?) But that’s messed up that You Shun was rubbing it in for Hao Zhi. (Shan Ren: What? You guys have to make me yell so you could be happy?) Shan Ren reading the love letter out loud? Awww…I feel so bad for Hao Zhi…seriously… (Though okay, it’s a bit funny, it’s messed up.) Shi Jun was cute though, just sitting there silently and observing the situation. 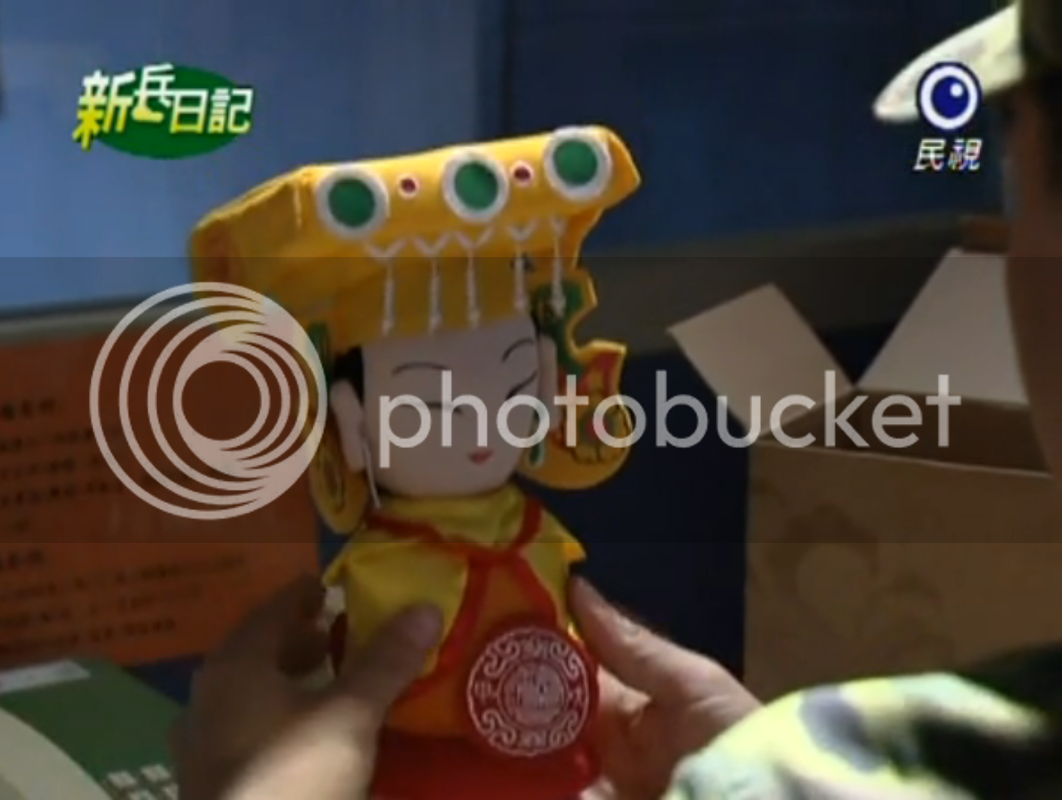 Awww…so cute. Ah Piao? LOL! OKAY! It was too funny! It was like he was challenging the ‘ghost’ so the ‘ghost’ was sending him a message that it was coming! LOL! He had to call Wang Wei for backup? That was just too exaggerated! (Shan Ren: Wang Wei, why are you moving so slow?) It was too funny! He saw the ‘ghost’ sitting there, holding the doll! LOL! (Shan Ren to Wang Wei: Don’t be scared…) Who’s scared in the first place? LOL! Wang Wei tapped him on the shoulder and he almost jumped. NO wait, he did. Wang Wei dragging him to the station? LOL! It was getting so funny! HAHAHAHA! Wang Wei was scared too! Well, not really. He was just shocked. He soon recovered after realizing the other person’s strange behavior. Shan Ren thought Wang Wei got ‘off’ by the ‘ghost’. Ohhhh….it was Chen Tian Bin sleepwalking, not a ‘ghost’. (Wang Wei: There’s no one on guard at the station right now. *Shan Ren rushes off but was stopped by Wang Wei* You’re not scared anymore? Shan Ren: I’ve never been scared!) Who was he lying to? LOL!

Chen Tian Bin have a reason to be shocked, lol. Usually, An Bang wouldn’t be as lenient. Not to mention Tian Bin just witnessed An Bang scolding at the other guy. I hope that he doesn’t take advantage of the situation too much though. Even if it was a condition they should be careful about but pushing it would be the last thing Tian Bin want to do. Hahahaha, Tian Bin was getting revenge major time, lol. And what surprised Tian Bin, even more, was Shan Ren wanting him to go sit down and NOT join the others in the routine. Strange indeed. He had no idea.

Wu Yong rubbing it in for Hai Sheng, lol. Yup, Shan Ren was definitely one of those who hold grudges all right. Wang Wei playing the joke on Shan Ren! LOL! It was only Luo Gang! LOL! Everyone was getting used to it – since Wang Wei was even making fun of Shan Ren in front of the other recruits, lol. Then Wang Wei did it again! It was really Sheng Nan this time around! Shan Ren still ranted on and on though the other recruits already quieted down. Or perhaps he thought they were in it with Wang Wei, lol. It was just priceless seeing him trying to defend himself after realizing it was really Sheng Nan. Hahahahahaha, lol. The others were having a field day really. A ‘one in a million’ chance to laugh at Shan Ren. He can’t do anything to Sheng Nan so he could only resort to yelling at the recruits, lol.

Xiao Yan making a long face? It was cute though. We’ll see how You Shun dodge out of this one. His mouth is slippery all right. BUT his attempt to hold her hand wasn’t so successful, lol. Wu Yong trying to sabotage them again? Oohhh… Wu Yong blackmailing them. Even You Shun’s persuasive method wasn’t so effective in this case.

So funny! He was trying to place a hand on her shoulder! BUT too bad she stepped away before he could do it, LOL. They were so cute though!

They were learning new stuff. Not surprised since they were too careless with the other thing. Need more time to master other tasks before moving on. Hai Sheng did that on purpose, right? Must be since he wasn’t one of the careless ones like Da Tong and Lai Hu. Yup, he was trying to annoy Shan Ren. And aww…that was nice to see more of An Bang guiding Luo Gang through it. And this time, Luo Gang wasn’t snapping either.

Previews show more tension with An Bang and Luo Gang’s family. But there are more scenes of Yu Ting and Hai Sheng, LOL. Ekk…more troubles coming up. Annoying reporters. Lucky there are hilarious scenes to watch!

Ratings? 10.75 if anyone wants to know. Still quite good though dropping slowly.