*WARNING*: MAJOR SPOILERS AHEAD. If you DO NOT want to be spoiled, please DO NOT read. You have been warned. 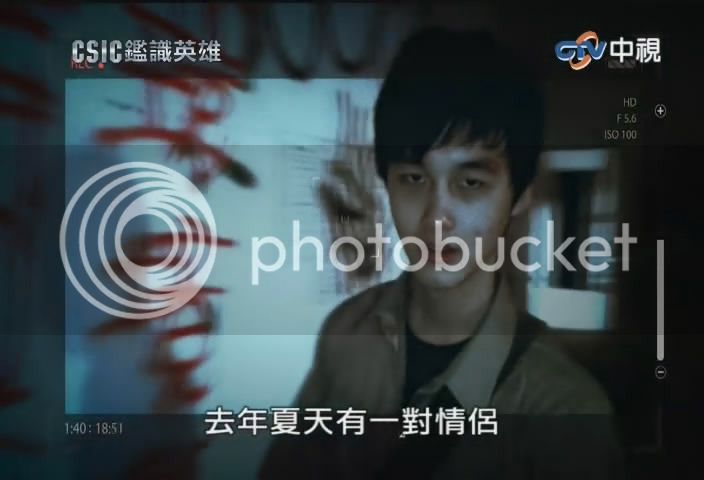 Entering the episode, a group of friends tried to enter a building. It was known that last summer a pair of lovers committed suicide there. From that time on, workers in that building would die ominously–through sudden sickness or accidents. While attempting to get his friends to go further into the building, the narrator ended up with some blood on his face. It was then that they ran out of there, thinking that the tale of the building was true.

Then in the lab, the others were standing around eating. They were also having fun teasing one another, especially Tou Mu, who was seen obsessing over something. Jing Ling tried to wrestle the special charm out of him yet to no avail so she went back to eating. Well, the fight might have been stopped by Xiao Xin–since she expressed her annoyance seconds before. When Lei Gong and Xiao Gao arrived, Yang Qian also handed the special treat she bought for them over. Yet what was hilarious about the bit was how Lei Gong seemed to be in fear of that particular delicacy.

The next day, the team came to process the scene. The blood that the other group linked to some ghost-related incident wasn’t so. It was their imagination mixed with the superstition that had aided their fear hence not reporting the strange incident to the authorities. After some initial processing of the first floor, they went to the second floor, which believed to be the original crime scene. There was also a certain pattern spotted at one of the blood puddles, which looked like a bow. And that was also when Tou Mu realized who the bow belonged to. Yet nothing was confirmed, only suspicions here and there. When they finally got the evidence processed at the lab, it was determined that the blood was indeed human, and belonged to one person. Tou Mu finally went ballistic when Xiao Gao joked about wanting Tou Mu to show him his girlfriend. Lei Gong and Yang Qian interfered in time and managed to get some DNA samples of Tou Mu’s friend to confirm or disprove. The sample matched the blood sample they had. Tou Mu was devastated, thinking of the worst situation at this point that could happen to his friend, considering the amount of blood they found at the crime scene. Tou Mu broke down completely, telling Lei Gong that he actually liked her and planned to confess to her yet was too late. He blamed himself for not sending her home yet had let her go home alone.

The next day, Yang Qian and Jing Ling approached a teacher, who supposedly was the last person seen talking to Huang Yi Han (黃以涵)–aka the victim–before she disappeared. The teacher, of course, denied knowing Huang Yi Han. No matter, the others had another way of figuring it out. They had tried to coordinate all the blood splatter points to pinpoint what was going on. Then there were also some kids messing around at the crime scene, trying to challenge Yang Qian. She managed to talk them into walking away. Yet they returned with more kids and some weapons when the others were long gone. Lei Gong appeared in time to grab onto Yang Qian and ran out of there. Yang Qian was upset that she had to run from those bad people, but Lei Gong reminded her that she didn’t have a gun and that it was more important to ensure her safety.

After all the calculations and analysis, Tou Mu was able to come up with some clues. He discovered another set of blood samples that could belong to the killer, considering how it seemed too high up to be Huang Yi Han’s since she couldn’t stand up after having lost that much blood. Lei Gong confirmed Tou Mu’s hypothesis and had returned to the crime scene to retrieve the blood sample. It belonged to a male. As they were coming up with possible suspects, Tou Mu went outraged, saying that there was an 80% chance it was the teacher. He seemed too worked up to be without bias at this point. Yet they still have to cover every angle hence summoning the teacher in for an interview. Indeed, the dude was definitely lying about his motives when he was confronted by Yang Qian for his stalking of Huang Yi Han. He said he only wanted to talk to Huang Yi Han and clarify that he was a married man and wouldn’t be engaging in some affair with her. Jing Ling, standing on the outside with Tou Mu, pointed out all the traces of the guy lying. Tou Mu was really losing patience and almost stormed inside to attack the guy, but was stopped by Lei Gong just in time. However, Lei Gong wasn’t able to get ahead when they had no choice but to release the guy, considering how his DNA didn’t match with the blood sample left at the crime scene. Tou Mu used that chance to grab at the guy and confronted him. What was unbelievable was how Lei Gong took a shot at the guy instead of letting Tou Mu do it. Lei Gong had already taken off his badge and handed over to Tou Mu for safekeeping when he delivered the blow, stating that he was using his identity as Tou Mu’s friend, and not as a cop. After Lei Gong and Tou Mu left, the guy threatened to sue them both.

A new development in the case was when Tou Mu went to retrieve some list from an artist. He previously went to that one gallery before with Huang Yi Han. Because of sentimental reasons, he wanted to buy one of the paintings. Yet that was also the key to crack the mystery for this one. The red color of the painting had turned since he last saw ’em. He finally used the special lights in the lab to inspect it even more. It was indeed like he thought, it was blood. More importantly, it was human blood. On the other hand, Xiao Xin was able to verify a mark at the crime scene, which they had guessed it could come from a weapon the killer used. It was the same as that of a palette knife. All the pieces seemed to point to Xia Jie (夏杰), the artist. When they rushed to the gallery to arrest him, he had already left. They had to retrieve all the records of possible candidates for the models to track down him. According to what he’d said, each of his paintings represented women’s beauty at different ages. The first one was nineteen, and Huang Yi Han was twenty-nine, so it made sense the third one would be thirty-nine. Yang Qian was able to remember some details regarding a possible location and was able to arrest the crazy artist. They managed to rescue the third woman. What they needed to do now was to see if there was a slim chance of the other two being alive.

Once again, Yang Qian was in charge of interrogating the suspect while Jing Ling was outside observing his expressions. Xiao Gao was there with her. Lei Gong, Tou Mu, Xiao Xin, and the others were still at the studio, searching for other clues. Jing Ling finally noticed something and called Lei Gong, telling him that the other two victims could possibly still be at the studio. Tou Mu noticed some mismatch on one of the walls so they cleared the area and attempted to break it down. However, tragically, they were too late, because that was where the maniac hid the bodies. The crazy artist still dared to justify his actions by saying since those women admired his works so much, they were able to become part of his paintings. (On the other hand, this reminded me of an episode from Criminal Minds where a crazy artist also used women’s blood to achieve realism in his paintings. Yet of course, the story was different.) After all that was said and done, they couldn’t really console Tou Mu, who lost his friend and also his chance to finally confess to her.