Just call me a hypocrite because I just declared someone into ‘exile’ and then got pulled in by his new project again.  Is this a temporary title? I can’t be sure of anything on this update but was just anxious to post about something. Considering how the production team didn’t even create an official Weibo account for the rest of us to follow yet so it’s hard to know for sure. However, some helpful Weibo members have provided some details that they managed to find out.

According to one of the articles, they had a blessing ceremony in Hengdian (橫店) and started filming since then. Ci Hun is directed by Li Li An (李力安), a very experienced director. I just looked at his list of works and though I hadn’t seen many of the modern ones, when I spotted that he was involved in the Bodyguards (保镖) saga, I became hopeful. Actually, I was excited since seeing some of the actors/actresses in costumes because I felt it wasn’t too much like some of the ‘more’ popular recent ones that had opted for overly blind colors or too overly glamorous ones. Yet I was wondering if I was just trying to find something to hang on while waiting for even more details to unveil. But when someone finally made a page on Baidu and listed director Li Li An, I had something to go on and am reassured it would be all right. Even if it is not ‘all’ right, but at least it would lean toward the ‘jianghu’ route than some recent ancient series that had falsely promised. One more thing is, I hope they use explosives or some similar effects rather than the ‘CGI’ effects because I’m not going to sit through some series that would ‘cheat’ like that and expect those of us who still enjoy a traditional wuxia to tolerate. (Again, if it’s going on the path of the Bodyguards saga, it would win in that department. Though Bodyguards was a long time ago, it was quite popular at that time and had gained its reputation.)

Moving on, the series is supposedly 30 episodes. I read from some entries on Weibo that it’s a revenge plot. At least part of it. It focuses on the Bai family and the He family, specifically their descendants. So far as filming goes, there are scenes of the Bai siblings, Bai Wen Hao (白文昊) and Bai Zhi Yan (白芷烟). And let’s not forget the main character He Jing Feng (何静风). The two sides would be going through some intense encounters. Not sure if it would be one big misunderstanding after all caused by some third party with the intention of wiping out both families. If it is, I’ll be laughing. (It wouldn’t be funny if they ended up fighting for nothing but seriously, that’s the typical formula of a revenge plot. And I don’t mind this time. Some details revealed thus far already make me want to watch immediately.) So far, the cast is as follows:

Julian Tsai aka Cai Heng (蔡珩) as He Jing Feng (何静风). I don’t recall watching him before but read good things about him. (Not sure if it’s fans being obsessed or not, but I’m willing to watch.) The kid is probably a younger version of him. His character is probably from a rich family. He’s the scholarly type from some other pictures I saw. But not sure if they would give him martial arts skills later in the plot. 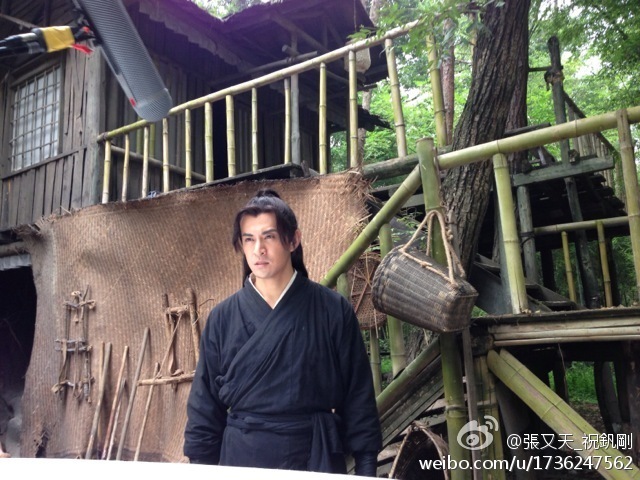 Jacky Chu as Bai Wen Hao (白文昊), but he is listed as Zhang You Tian (张又天) because he changed his name recently. I was worried that he looked too weird in ancient outfits but the production team did a good job. He fitted right in. Not too bad. There will probably be fighting scenes for him. (Time for stunt double or is he game? LOL….) But there’s a part where he lost his hand and that means he has to tuck it in the back somehow to hide it. I’m more curious about how that fits into the plot. Not a glamorous character for sure, and he has to suffer a lot throughout. Yet is he going to be smart or dumb type? If he’s a bit smarter or at least bearable, it’s better to watch.

Liu Xi Yang (刘熙阳) as Bai Zhi Yan (白芷烟)–the girl, of course. I couldn’t find one with her by herself. But they’re the Bai siblings so they have a lot of scenes together.

Yang Jing Yu (杨婧妤) as the young Bai Zhi Yan (白芷烟)–the little girl. The cute young actress actually has a Weibo account and had posted up a comparison of the two siblings.

Here’s another one for her and in costume too. So it looks like the Bai family was once quite wealthy (from the quality of the costumes) but had encountered the worst hence losing everything. Yang Jing Yu disclosed in another post that there was a scene that her brother had to go steal some steamed buns for her.

Ye Si Miao (叶思淼) as Mrs. He aka He Jing Feng’s mother. Regarding other cast members, I’m still trying to hunt down. As I said before, it’s kind of hard to look for info with them not having an official page yet.

Anyway, in Jacky’s last entry, he said it was his last day filming in Hengdian and his next stop would be Quanzhou (泉州). I’m not sure if that meant the same for the others or if he was done with his scenes there. But I’ll try to update more when I find out. I’m following as many of the cast as I could hunt down to check on the progress at this point. So if anyone wants to jump in and correct me on stuff, please do since I said many times already, still unclear on stuff, and wouldn’t want to mislead on purpose.

*All images were collected around the net, therefore, belonging to their rightful owners.